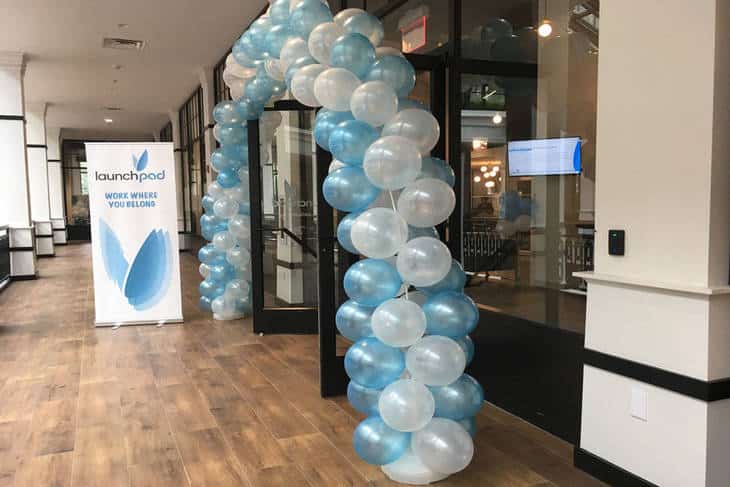 Newark, NJ—Scores of residents and entrepreneurs from the city attended a ribbon cutting ceremony and celebration for the opening of Launch Pad, a co-working space located in the Hahne & Co building on Halsey Street.

Chief Information Officer for the City of Newark Seth Wainer told TAPInto Newark that Launch Pad creates an important space for both big and small businesses in the city. Launch Pad originally opened in New Orleans after Hurricane Katrina since expanded to a few other emerging areas.

“We’re thrilled that they’re here in Newark at this beautiful space because it really drives the creative economy,” Wainer said. “It brings entrepreneurs, seasoned companies like Phone.com together with creatives, with lawyers, with graphic designers into this space that maximizes these collisions.”

Party-goers examined the art created by local artists adorning the columns within the co-working space.

At Launch Pad there are tiers to membership, such as renting a co-working desk, renting a permanent desk with 24-hour access to and renting full offices with doors. Launch Pad can also be used for free community events and meetups. For example, Coding for Newark meets at Launch Pad.

There is fast, high speed internet, the ability for members to print and other amenities such as coffee.

Wainer said he thinks Launch Pad is now the second largest co-working space in the city other than one in the Gateway complex. Wainer said this is an important point because the city’s current administration wants to “grow the definition of downtown so that it doesn’t just limit itself to the larger buildings as it has in the past.”

Schultz, Launch Pad CEO, said since opening in April, more than 60 people already became members and he is hopeful for the future of the co-working space. (Editor’s note: TAPinto Newark rents space in Launch Pad.)

“We’re really excited to be opening in Newark,” Schultz told TAPInto Newark. “LaunchPad is coming into the market as part of a collaborative community and many people who have already been working very hard over many years to build the entrepreneurial community. We’re looking forward to be an additive to that.”

Schultz says he wants to create spaces where new ideas and businesses can grow organically.

“Our strategy is focused around the mission to bring entrepreneurship and the ability to start a business to every city around the country,” said Schultz. “We believe entrepreneurship and startups can’t just be relegated to the coasts… to San Francisco and New York. Cities like Newark and cities like New Orleans and Memphis and Nashville, Tennessee also need strong entrepreneurial fabrics. Launch Pad wants to play a part in that.”

Andre Preoteasa, a member of Launch Pad and founder and CEO of System of Systems IT Consultants, said working at Launch Pad is useful in his work process due to the people he’s met in the co-working space.

“The people that fill up the space will really define what happens in Newark,” said Preoteasa. “There is a lot of entrepreneurs, a lot of talent, a lot of people who want to create and make the world better. Everyone I’ve met is more interesting than the person before them. I love it.”

Preoteasa said meeting the artists as they worked on creating the space and viewing the designs the artists painted is a “nice influence” and helps him to focus and work because the art adds beauty, but not distraction.

“Newark fits with our strategy of people with pride, cities with soul,” Schultz told TAPInto Newark. “Newark has a long history and a lot of people who have been committed to the city and have worked very hard to build the city and build the energy and build the environment to what you see today… the beauty of the Hahne building and so we are really excited to be a part of that.”